Dick Hoyt, who became a familiar sight pushing his son Rick in a wheelchair at road races around the country, especially the Boston Marathon, died on Wednesday at his home in Holland, Mass. He was 80.

His death was announced by the Boston Athletic Association, which organizes the Boston Marathon. His son Russ said the cause was congestive heart failure.

Rick Hoyt was born in 1962, a quadriplegic with cerebral palsy, unable to control his limbs or speak. “We had long since learned how to interpret our son’s smiles and nods,” Dick Hoyt wrote in his 2010 book, “Devoted: The Story of a Father’s Love for His Son.” “But as good as everyone in the family was about figuring out what Rick needed, we were still only making educated guesses.” 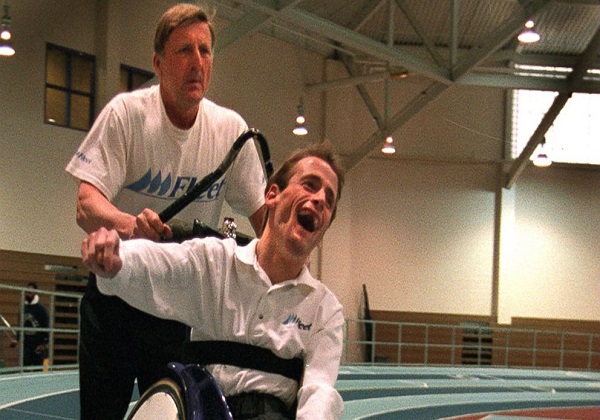 But in 1972, engineers at Tufts University built a computer that allowed Rick to communicate by choosing letters with a tap of his head. His first words were “Go Bruins,” revealing a passionate love for sports. In 1977, Rick asked to be involved in a five-mile benefit run. Though his father was not a competitive runner, he pushed Rick in his wheelchair the entire distance, finishing next to last.

“When my dad and I are out there on a run, a special bond forms between us,” Rick Hoyt told The New York Times in 2009 with the help of his computer voice program. “And it feels like there is nothing Dad and I cannot do.” 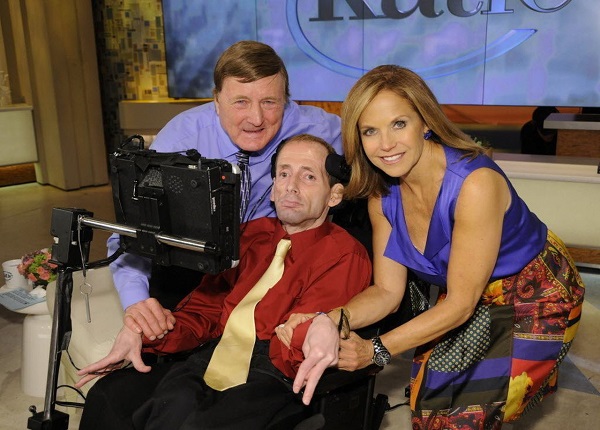 While they were most associated with the Boston Marathon, and became revered and inspirational figures in that city, the two completed more than 1,000 races, many in astonishingly fast times.

Their fastest marathon time came in 1992 at the Marine Corps Marathon in Washington and Virginia: 2 hours 40 minutes 47 seconds. That time put the elder Hoyt first in the 50-to-59 age division despite his extra load. 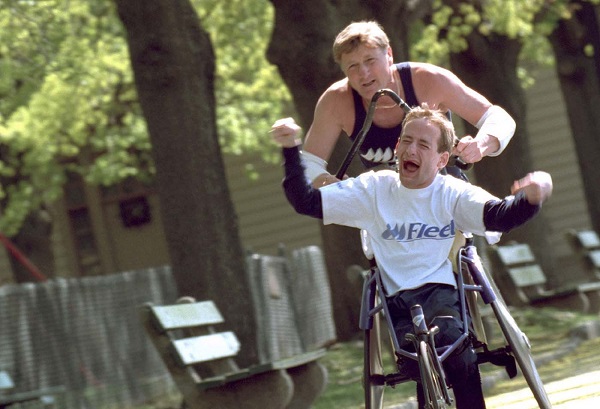 They ran the Boston Marathon nearly every year from 1980 to 2014. At first they ran unofficially, because officials balked at classifying their hybrid entry as runner or wheelchair competitor. In 2013, they were stopped before finishing because of the deadly bombing at the finish line. They had expected that to be their final Boston Marathon, but they returned in 2014 to finish the race successfully for the 32nd time.

They also contested triathlons, including six at the grueling Ironman distance, in which their best time was 13:43:37. Dick pulled Rick in a boat for the swimming legs, and they rode a tandem cycle for the bicycling segment. They also biked and ran across the country in 1992. 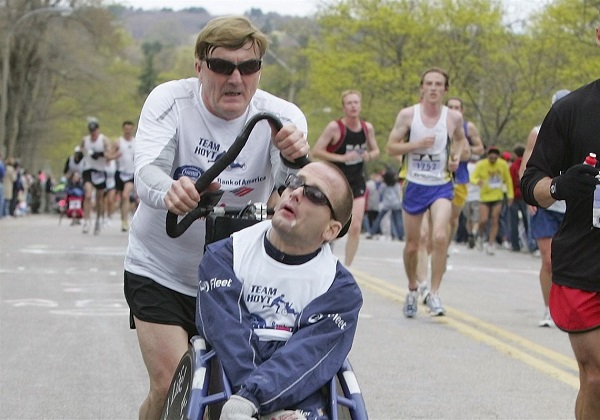 With the help of the computer he used to communicate, Rick graduated from Boston University with a degree in special education in 1993.Dick Hoyt was born on June 1, 1940, in Winchester, Mass. His father, Alfred, worked as a used-car salesman, and his mother, Anna (Jaworski) Hoyt, was a homemaker. Dick grew up in nearby North Reading and was captain of the North Reading High School football team.

He married his high school sweetheart, Judy Leighton, the head cheerleader, in 1961, soon after they graduated. She went on to found Kamp for Kids, which allowed children with and without disabilities to go to camp together.He served in the Army National Guard and Air National Guard for 37 years. After achieving notoriety for his and his son’s running exploits, he began a career as an inspirational speaker, giving as many as 100 speeches a year.